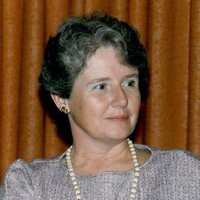 Jane Ann Miller, 86 of Madison, Connecticut and Milton, Vermont died April 18, 2020 with her children at her side. Wife of the late Ross L Miller, Jane Ann was born in Cambridge Massachusetts, the daughter of Laura and Victor Cole. Her father was a career naval officer, and the family moved often during her childhood, but returned to camp in Milton Vermont in summers when practical. From 1947-1950 Jane Ann accompanied her parents to London where her father was Naval Attache and was an enthusiastic participant in the vibrant postwar scene. She somehow managed to avoid formal schooling while becoming remarkably well educated. Living alone in Paris for six months at the age of 16 she quickly developed a lifelong fluency in French. After three years of what would have normally been spent in high school she returned to the states and four years later graduated with a degree in political science from Middlebury College. She later worked in finance, primarily in insurance at IMI in Madison.
Jane Ann was a fierce advocate for woman's rights and opportunity and an active proponent of the Equal Rights Amendment. She had leadership roles in the League of Woman Voters and the American Association of University Women. Many of her views which she was always eager to share with her more conservative friends and neighbors are now the accepted norm.
Jane Ann enjoyed travelling and the theater and regularly attended Long Wharf and Goodspeed. No meal was ever overcooked if Jane Ann was involved; there was no such thing as a steak too rare. More disconcerting for her family was her insistence that despite the Scotch Tape she wore on her glasses to correct her double vision she was an exceptionally safe driver because she didn't drive on the highway. She was on the boards of the Scranton Memorial Library and the Woman's Seamans Friend Society. She was a Corporator of Middlesex Hospital, and was an active member of the Connecticut chapter of the P.E.O. She enjoyed her various book groups and international relations group.
Jane Ann is survived by her two children, Laurie Field Beck of Bath Maine and J. Christopher Field of Noank, Connecticut and a stepdaughter Lucia Miller of Northhampton, Massachusetts along with four grandchildren and one step grandchild. She was predeceased by her brothers Richard and David Cole and her first husband John Field. In lieu of flowers, donations may be made in her memory to Shoreline Soup Kitchen and Pantries, P.O. Box 804 Essex, CT www.shorelinesoupkitchens.org. There will be a private burial in the Milton Boro Cemetery this summer.

To order memorial trees or send flowers to the family in memory of Jane Ann Miller, please visit our flower store.