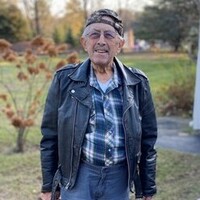 Milton, VT—Irving "Mac" Stanley Mckinstry, 86, passed away July 12, 2021 at University of Vermont Medical Center. Mac was born on October 11, 1934 in West Haven, VT, the Son of James McKinstry and Alice (Kirby) McKinstry. He married Barbara Comstock on December 1, 1956 in Proctor, Vermont. In his younger years, Mac served in the 101st Airborne as a paratrooper. Mac was an award winning Dairy Farmer for most of his life in Colchester, Vermont. He also was the proprietor of Vermont Vinyl Tops and Upholstery. Above all, Mac was known for being an earnest, joyful and hardworking Christian man & father loved by all. He is survived by: his spouse of 64 years Barbara Mckinstry; his children, Kevin (Jill) McKinstry, of Colchester, Kelly (Lance) Fournier, of Ferrisburgh, Lisa Chaffee, of West Bolton, Lori (Richard) Heerschap; his 8 grandchildren; his 4 great-grandchildren; and his 3 surviving Siblings. Predeceased are his 8 siblings and one beloved grandson. We will miss you dear husband, father and friend. Jeremiah 6:16 In accordance with Mac's wishes, a graveside service will be held at the Riverside Cemetery in Proctor, VT on July 23rd at 1:00 pm. In lieu of flowers please consider giving to the Vermont Organ Donation Program. "Papa's Hands." A spool of thread. A bit of sleek vinyl. The rough thick metal sewing machine glistened in the dull yellow light from the old desk lamp. It was quiet. The machine with all its gears and knobs starting their endless wait for the familiar hands to turn them again. Now, these hands weren't like a typical set you'd see on your average man. They were unmistakably large and bulky. Some of the fingers were crooked and angled from an accident helping his father with wood cutting as a small boy. The large paws hardly looked anything but coordinated but would sail smoothly over the threads and leather fabrics making the most precise upholstery repairs you'd ever seen. Those hands swung heavy every sunrise on the long walk to the milking barn, carrying cold metal pails, gripping rough twine and tossing bulky bales of hay. They gently and firmly handled the skittish cows and even brought new calves into the world. The hands clutched on to parachutes in the army, boldly leaping out of planes in Cuba. Those same hands delicately held the much smaller ones teaching his children to walk. The hands and fingertips firmly gripped the wobbly unsure peddle bikes as his children and later on grandchildren learned to ride. They quickly wrapped around their little bodies with any fall, always there comforting in their soft bear like grip. As the years past, his body started to fade and wither as all men do. But curiously, the hands never altered. They retained their muscle and breadth. The reliable toughness never wavered. The tenacious calluses a clear reminder of the vigorous labor they veteraned for over 80 years. The sheer size of the loving paws against his fragile and rapidly slendering body was impossible to disregard. Time was slipping away. The hands gripped strong until the final hours. Grasped to the hands of his loved ones until the final release...the hands calm and relaxed in endless peace. As years pass and memories fade, we will hold tight and grip firm to the memory of those big, wonderful, loving and earnest...hard working paws.
To order memorial trees or send flowers to the family in memory of Irving S. McKinstry, please visit our flower store.