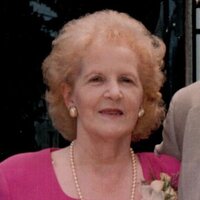 Milton - Helen "Nell" Mayville, 91, died peacefully on Monday, May 1, 2017 at the Starr Farm Nursing facility in Burlington, surrounded by her loving family.

Helen was born on December 27, 1925 in Pittsford, VT., the daughter of Alton and Mary (Carrigan) Grace. She was the youngest of six children born during the lean years of the depression, which contributed to her strong character. Helen's primary role in life was taking care of her family as a wife and mother. She cared for her husband Ken in their home for many years prior to his passing. She was always very caring and compassionate.

Nell graduated from Mt. St. Joseph Academy in Rutland and began working for New England Telephone in Rutland, and later as an operator at the Federal Building in Burlington. On September 27, 1947, she married Kenneth Mayville at Christ the King Catholic Church in Rutland. Ken and Helen worked for Helen's dad Bill Grace at his saw mill and logging camp in Windham VT during the first year of their marriage and they always said it was the best time of their lives.

Nell and Ken settled in Milton in 1949 and began their family. Surviving are her sons, Kenneth and his wife Liz of San Angelo, Texas; Bill and his wife Ruth of Milton, her grandchildren Emmy Connor and husband Anthony of TN, Bill Mayville and wife Melody of TN, Kara Townley and husband Neil of San Angelo, TX, and Cole Mayville of San Antonio, TX. She is also survived by her great grandchildren Liberty and Gunner Townley, her sisters-in-law Mary Hamilton Grace of MA and Jane Lafayette of Milton.

She was predeceased by her husband Ken in 2006 and by her sisters Mary O'Brien, Margaret Slattery and her brothers Pete, Art and Jim Grace. The family extends their deep gratitude to the staff at Starr Farm Nursing Center and to the team at Bayada Hospice, all of whom gave their love and services to Helen over the recent weeks and months.

Visiting hours will be held on Monday, May 8, 2017 from 4-7pm in the Minor Funeral and Cremation Center in Milton.

Memorial contributions in Nell's name may be made to: Catholic Relief Services

A Mass of Christian Burial will be celebrated on Tuesday, May 9, 2017 at 11 am in St. Ann Catholic Church in Milton, with burial following in St. Ann's Cemetery.


To order memorial trees or send flowers to the family in memory of Helen &#034;Nell&#034; Mayville, please visit our flower store.