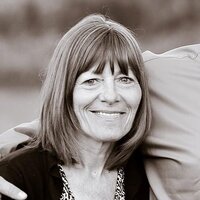 When the doctors at Fletcher Allen Hospital told Gretchen L. Karnes, three days before her 65th birthday, that she had weeks left to live, she guffawed and turned to look out the window. University college students were making their way to and from classes on cross country skis as the first January storm of 2020 beat on, coating the world outside the hospital in a blanket of white snow. Gretchen told the doctors she was sorry, but doctors had diagnosed her 20 years before with Multiple Sclerosis, and had told her then that she'd be in a wheelchair within five years and dead in ten. "So I'm sorry," she said, "but if you tell me weeks, I'll live months." And she meant it. She weighed in at 100 pounds, but we knew to bet on her corner. What the doctors didn't know was that their terminal diagnosis was up against a tough competitor: a stubborn, loyal, loving, red-headed farm girl raised in Hoosick Falls, New York, who refused to give up on anyone or anything, especially herself. Besides, she told them, she had a brand new, six-day old granddaughter to meet. "Double your expectation," she said, "and that will be somewhere closer to what is going to happen."
Four days later, as promised, we brought her home, where she spent her remaining time with immediate family. "No nurses," she said, and so there were no hired nurses. Her daughter and five-year old granddaughter slept in the room with her every night, singing and reading and counting ceiling tiles if they ran out of words. Gretchen refused medication most of the time, preferring (as always) to steel herself against the pain and maintain her faculties. At 21, Gretchen graduated from Syracuse University and moved immediately to Burlington, Vermont. She worked for GE until both her children were born and then spent nearly two decades as a licensed in-home childcare provider. She loved children above all else and had a special, almost secret-coded way of communicating with them. Her eldest granddaughter and namesake, Greta, often joked how Nana was her "other" mother.
After a devastating diagnosis of MS in early 2000, Gretchen found her next passion, and another family of friends, in collecting, buying and selling antiques. If you've ever been to an antique shop in Chittenden County you'd know Gretchen's goods immediately; her attention to detail and love of primitives radiated from a space filled with old step back cupboards with rusty square-headed nails and chipped paint, beautiful Shaker boxes, quilts, and other early Americana treasures.
Gretchen, a small town girl, beauty queen, captain of the cheerleading squad, became a full-time annoyingly amazing mother, then an even better (and more annoying) grandmother. Her perseverance, fierce independence, and loyalty were inimitable. She ran cross country and preferred riding horses bareback. She liked wearing shoes almost less than bras, and never needed nor cared for makeup. She imbued love in everything and everyone she touched -- unless you tried to tell her to slow down. Then she'd push you aside, roll those cerulean blue eyes, and tell you to get out of her way. She fought her disease with the ferocity and heart of a lion, and refused to give up.
She lost her beloved father, John "Red" Smith, in 1996, and is survived by her husband Ron Karnes (South Burlington), two children, Jaime and Joshua Karnes, their partners Jordan Burke, Ph.D., and Erin Fagga, and three fierce and feisty grandkids, Greta Burke, and Mason and Chloe Karnes, who will miss her "to the galaxy and beyond." As one her favorite artists aptly wrote: "I'll let you be in my dreams if I can be in yours." So like Bob Dylan said, we'll keep her alive in our dreams and invite those who loved her to do the same, because we know you'll be in hers.
A Celebration of Gretchen's life will be held at the Minor Funeral Home in Milton on Saturday, March 14th, from noon-2pm. Please come, bring something to add to her casket, which her husband built with love from 160 year old barn board; her closest friends will line it with donated antique quilts. An exact and befitting final resting place for a woman who "had an eye" for gorgeous, old furniture. Oh and of course send flowers, but no roses or daises or anything predictable. Gretchen hated anything too ordinary, and preferred always to surround herself in wild flowers: a testament to her inner K-K-Katie girl. (And if you don't know what that means, she'd laugh and send you a copy of "The Way We Were"). So Gretchen, wherever you are, "go get em" as Hubbell would tell Katie. We are forever changed by what you taught us through life, and will never be the same after your death. You have and will always be the front seat driver of our lives, and no words or inches of newspaper column can contain or withstand the vacillating love and pain we'll carry with us, always.

To order memorial trees or send flowers to the family in memory of Gretchen Lynne Karnes, please visit our flower store.