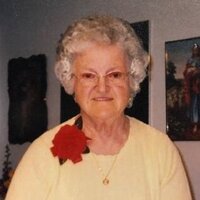 Westford - Gisele Dora Caron, 83, died peacefully on Monday April 13, 2020 at the Arbors at Shelburne.
Gisele was born on June 10, 1936 in Paquetteville, Quebec the daughter of William and Albina (Bellville) Breault.
She immigrated to Westford at a young age. On November 29, 1958, she married Gerard Caron at St. Luke Catholic Church in Fairfax. She and Gerard were married for 41 years before Gerard died in 2000.
Gisele is survived by her sons Denis Caron and his wife Donna of Westford, Louis Caron of Virginia Beach, VA., and Roger Caron and his wife Lori of Johnson and by her grandchildren Whitney, Taylor, Matt, Angela and Joshua.
She is also survived by her brother Germain (Cecile) Breault and her sister Gracia (Emery) Boutin and by several nieces and nephews.
In addition to Gerard and Claude, she was predeceased by her brothers and sisters Lucien, Gertrude, Alcide, Roland, Romeo, Albert, Carmen and Clement.
There will be no services at this time due to COVID-19. A Mass of Christian Burial will be held at St. Luke Catholic Church in Fairfax at a later date when allowed. A graveside service will be held at St. Luke's Cemetery in Fairfax at the convenience of the family.
Online condolences may be made to www.minorfh.com

To order memorial trees or send flowers to the family in memory of Gisele Dora Caron, please visit our flower store.