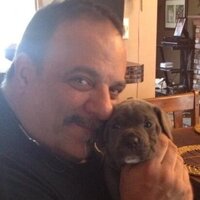 George was born on September 30, 1965 in Brooklyn, NY, the son of Milton and Phyllis (Schiazzano) Saris.

He was employed by Culligan Water in Colchester Vermont.

He is survived by his son (dog) Jaxx, his brother Craig Saris and his wife Amy and their children Chase and Madelyn Rose of Redding, CT, by his extended family and dear friends Nichole Halse and Everett Windover. Jodi Verba, Momma J (Josephine Nolan-Zirk), Kasey "Princess" Verba, Josh Goodrich, Corey, Dani and Barrett Verba. Jimmy, Danielle, Sage & goddaughter Dakota Quackenbush, Bob and Karyl Sweeney, and Charlie and Gail Merlo. The Culligan family and many others.

George had the ability of bringing strangers together with his infectious smile and colossal personality. George's friendships span many miles and all who were lucky enough to know him are truly blessed.

A celebration of George's life will be held on Sunday, June 11, 2017 from 1-3pm in the Minor Funeral and Cremation Center, Route 7 in Milton.

In Lieu of flowers, donations can be made to www.canecorsorescue.org


To order memorial trees or send flowers to the family in memory of George P. Saris, please visit our flower store.