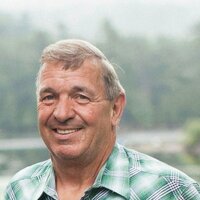 Gary was born on April 27, 1951 in Burlington, the son of the late Sidney and Emma (Hallock) Jennings.

He had worked for the Town of Colchester Highway Department for 42 years where he enjoyed spending time behind the wheel plowing snow. Gary enjoyed hunting, fishing, tinkering on cars, NASCAR, the Boston Red Sox, tilling the land and spending time with his dog, Ginger.

He is survived by his wife Brenda (Ploof) Jennings of Milton and by his children James Jennings and his wife, Renae of Kalona, Iowa, Vickie Elwood and her husband Bill, Kelly Irwin and her husband Shawn and Craig Jennings and his wife Christine, all of Milton. By his 12 grandchildren, Emma, Caroline, Connor, Colin, Kyle, Caleb, Trevor, Brady, Alana, MacKenzie, Kira and Jacob; his brother Lawrence "Bucky" Jennings of Richmond, his sisters Virginia "Ginny" Morgan and her husband George of Richmond, Shirley King of Milton and Rita Parker of Colchester; his mother in law, Pat Manley of South Hero and Florida; his sister's-in-law Bonnie Yarnell and friend George of Hinesburg and Marilyn Godin and husband Paul of Florida and Vermont as well as several nieces and nephews.

Besides his parents, Gary was predeceased his brother Frank Jennings, and his father-in-law, Abe "Bill" Ploof and his brother's-in-law Francis King and George Parker.

Memorial contributions in Gary's memory may be made to the National Wildlife Federation, 11200 Wildlife Center Drive, Reston, VA 20190

Gary's family wishes to thank the Oncology Department at the UVM Medical Center and the Hospice Team of the VNA for the kind and compassionate care extended to him during his illness.

Visiting hours will be held on Tuesday, June 26, 2018 from 10 am to Noon in the Minor Funeral and Cremation Center in Milton followed by a Time of Remembrance at Noon. Burial will immediately follow in the Riverview Cemetery in Richmond.


To order memorial trees or send flowers to the family in memory of Gary Lee Jennings, please visit our flower store.