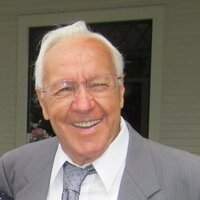 Frenchie was born in St. Lucien, Quebec on February 10, 1931, the son of Georges and Eugenie (Blanchette) Lefebvre. He had worked for Ralph Goodrich Construction for over 30 years. He was an avid bowler, horseshoe player and loved to dance.

In addition to Kathryn, he is survived by his children Robert Lefebvre and his wife Cindy of Milton, Richard Lefebvre of Essex, Denise Lefebvre and her husband Robert Smith of Grand Isle and Cindy Williams and her husband Mark of Warwick, RI. He is also survived by his grandchildren Christina, Katie, Erica, Emma, Connor, Rachel and Nathan and by 7 great grandchildren and several nieces and nephews.

Visiting hours will be held on Monday, June 13, 2016 from 4-7 pm at the Minor Funeral and Cremation Center in Milton. A Mass of Christian Burial will be celebrated on Tuesday, June 14, 2016 at 11 am at St. Ann Catholic Church in Milton.

The family would like to express its thanks for the wonderful help and care given by the staff at Birchwood. If desired, friends and family may make memorial contributions to the Dementia Special Care Unit Activities Fund at Birchwood Terrace Healthcare, 43 Starr Farm Road, Burlington, VT 05408

To order memorial trees or send flowers to the family in memory of Fernand "Frenchie" Lefebvre, please visit our flower store.