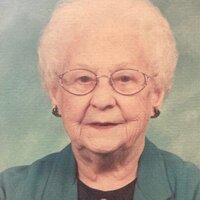 EMMA D.FAY - SOUTH BURLINGTON, VT
Emma Fay passed away peacefully on February 1, 2021 just two weeks after celebrating her 105th birthday. Emma was born in Ferrisburgh VT on January 18, 1916 to Francis and Emma (Constantine) Collette. At a young age, the family moved to St Albans VT where Emma spent her youth and early adult life. During this time she met and married her husband, Henry W. Fay. He predeceased her in 1982.

Emma and Henry were married on May 30, 1941 at St Mary's Church in St Albans. They settled in Burlington, VT where they raised their children and lived a very active life. They enjoyed dancing and the sounds of the Big Band Era could often be heard at their home. After Henry's death, Emma sold the family home on Howard Street and moved to The Pines in South Burlington, VT where she spent the rest of her life enjoying many social times in the company of all her friends. Surviving are her two children, Cheryl Demers and her husband Andre of Milton VT, and James Fay and his wife Laurie of Alburgh VT. Emma spent many cherished times with her grandchildren and great grandchildren who all referred to her as Nanny. She was predeceased by her first grandchild Eric Pepin, leaving (Stephanie Cushing) and their son Nathan, Karen Hammond (Matthew) and their children Riley and Brody, Danielle Brinson (Graham) and their children Camden and Liam, Brendan Fay (Ashley) and their children Abigail and Weston, and Stephanie Fay (Andrew Borah). She also leaves behind three step grandchildren, Derek Demers (Dorey), Tina Barnes (Joel) and Jennifer Charbonneau (Edward) along with their families, and many dear nieces and nephews as well.

Emma (who was more notably known as Babe') loved all sports, and enjoyed watching sports on TV right to the end. She was a big fan of the UConn girls' basketball team, and faithfully followed the Boston Red Sox, Bruins hockey, Patriots football, as well as the UVM teams. She was a stand-out basketball player during her high school years at BFA St Albans, winning the New England foul shooting contest one year and contributing to the success of the team despite her small stature, a mere 5 feet tall!

Emma was very active at Christ the King Church and school, and also within her community. She began the first girls' basketball program at Christ the King School, serving as head coach for many years.
Emma spent several years as a member of the Board of Directors for the University of Vermont Extension Service. She was a 4-H leader for many years, and also served as president of the Chittenden County 4-H Leaders Association. She volunteered many hours at both Rice Memorial and Christ the King during her children's formative years.

Besides her husband Henry and grandson Eric, Emma was also predeceased by her parents, her brother Frank Collette, and her sister Marceline Lewis along with numerous other family members.

Our family would like to express our sincere thanks to her special friends at The Pines who watched over our mother. We especially want to thank Dr. Peter Gunther and Dr. Matthew Watkins for their excellent care of our mother over the years.

Due to COVID-19, funeral services will be private with a spring burial at Mount Calvary Annex in Burlington, VT.

Arrangements are under the direction of Minor Funeral Home.

To order memorial trees or send flowers to the family in memory of Emma D. Fay, please visit our flower store.