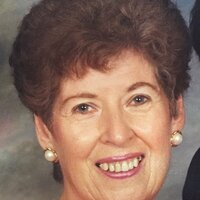 Elsie Anna Woodwell, of Ocala, FL/Milton, VT passed away peacefully, surrounded by her adoring family, on March 24, 2017 at The Legacy Hospice House in Ocala, FL after an extended illness.

Elsie was born March 10, 1934 in West Orange, NJ to Lincoln and Helen Holliday and soon after moved to Lansdale, PA where she spent her childhood years. She graduated from North Penn High School and went on to attend Zion Bible College in East Providence, RI where she earned a degree in Music.

It was at Zion that she met her beloved husband, the Reverend Roger A. Woodwell. They were married on June 4, 1966 and recently celebrated 50 years of marriage. The Lord blessed them with two children and four wonderful grandchildren.

In 1966, Roger and Elsie entered the Pastoral ministry, happily serving together in numerous Assembly of God churches for nearly 45 years, including Keene Assembly of God in Keene, NH and Community Bible Church in So Burlington, VT. After retiring from full-time ministry in 2006, they continued to provide part-time support to several churches in VT, including Cornerstone Community Church in Milton. In June of 2016, they moved back to Ocala, FL to enjoy their retirement home and the warm weather.

Elsie was a godly woman whose faith and courage never wavered, even when faced with challenging health issues over the last year. She loved the Lord with all her heart and it showed by the smile on her face and her servant's heart. Her words of encouragement and selfless acts of kindness will always be remembered. She was an exceptional pianist and made joyful music whenever she sat down at a piano. More than anything, she enjoyed spending time with her family and was an exemplary wife, mother and grandmother.

She is survived by her loving husband, Roger, of Ocala,FL/Milton,VT; her daughter and son-in-law, Lori and Rick Howard and their two children, Austin and Jessica of Georgia, VT; her son and daughter-in-law, Jonathan and Jackie Woodwell and their two children, Emily and Noah of Milton, VT and Bothell, WA; siblings, Robert Holliday of Lansdale, PA and Dorothy Westburg of Woxall, PA.

A celebration of Elsie's life will be held on May 9, 2017 at 10:00am at Community Bible Church, 2025 Williston Rd, So Burlington, VT. A private interment will follow at the Georgia Plains Cemetery in Georgia, VT. Arrangements are being made by Minor's Funeral Home in Milton, VT. In lieu of flowers, donations may be made to The Legacy House at the Hospice of Marion County, 9505 SW 110th Street, Ocala, FL 34481.


To order memorial trees or send flowers to the family in memory of Elsie Anna Woodwell, please visit our flower store.