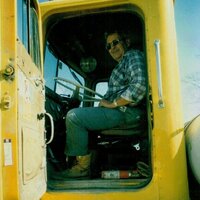 Elmer Howard Gover, 82 of Grand Isle passed away peacefully in the presence of his loving family on Tuesday, August 23, 2016 in the Franklin County Rehab Center in St. Albans following a long illness.
Elmer was born January 21, 1934 in Cambridge, the son of the late Alanson and Muriel Davis Gover. He was a member of the Grand Isle Fire Department. He worked for over 40 years driving Concrete Ready Mix trucks for S.T. Griswold and later the S.D. Ireland Concrete company.
He loved his family and will be greatly missed. Elmer is survived by his wife, Florence of South Burlington and their children, Chris Gover and his wife, Gloria of Colchester, Randy Gover of Grand Isle, Sandy Brown of Grand Isle, Debbie Johnson of North Hero and Mary Gover of South Burlington and their foster daughter, Kimberly Murray of St. Albans. Several grandchildren, great grandchildren, great great grandchildren, his sister in law, Jackie Gover of North Carolina and many nieces and nephews. He was predeceased by his brother, George Gover on May 10, 2016.
Visiting Hours will be held on Friday, August 26, 2016 from 9 am to 11 am in the Minor Funeral Home, Route 7 in Milton. A funeral service will be held at 11 am in the funeral home. Burial will follow in the Grand Isle Cemetery.

To order memorial trees or send flowers to the family in memory of Elmer Howard Gover, please visit our flower store.