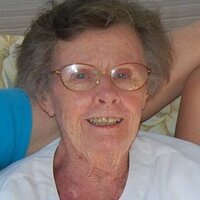 Georgia, VT Elizabeth Petz (Betty), 94, of Georgia, VT passed away peacefully on Wednesday, February 2, 2017, at Green Mountain Nursing and Rehabilitation Center in Colchester, VT.
Betty was born October 20, 1922, in Dublin, Ireland, the daughter of the late William and Elizabeth Thompson Murdoch.
At a very early age, Elizabeth and her family immigrated to the United States aboard the SS Transylvania in the 1920's. After passing through Ellis Island the family found a home in Elizabeth, NJ where she also attended schools. It was there, while attending a wedding that she met the love of her life, George Petz, and on August 10, 1946, they were married. She and George, who predeceased her in 2012, enjoyed 65 years together. They ran a grocery store and later a luncheonette, catering to the needs of the community. She later worked as a secretary for Cooper Industries and was very active in the Order of the Eastern Star.
Retirement took Betty and George to Myrtle Beach, SC, where they enjoyed twenty years of travel and relaxation. Betty moved to VT in 2012 to live with her daughter and in 2015 to the Green Mountain Nursing and Rehabilitation Center. Our special thanks to the nurses and staff for their kindness and care of Mom.
She will be dearly missed by her children Linda Carroll of Georgia, VT, and son Ronald Petz and his wife Vivian of Roselle Park, NJ. She also will be dearly missed by her grandchildren and great-grandchildren Julie and Craig Ludko and their children Alexander and Madelyn of Cary, IL; Joanna Carroll and her partner Carole Parent and their children Alainna, Brandon, Dylan, Gavin and Julia of Sheldon, VT; Christopher Carroll and his children Katrina, Jordyn and Jennifer of Georgia, VT; Michelle Petz of Roselle Park, NJ; and Richard Petz and his wife Kristin and their children Eloise and Nathan of Hoboken, NJ. She also leaves loving nieces and nephews. Besides her parents and husband, Betty was predeceased by her brother Richard Murdoch and brother, Andrew Murdoch and his wife Alice and her son-in-law Arthur Carroll.
Betty and George will be interred at the Woodbridge Memorial Gardens in Woodbridge, NJ at a private ceremony.
Memorial donations may be made to the Georgia Fire and Rescue Association, 47 Town Common Road, Georgia, VT 05478 or the charity of your choice.

To order memorial trees or send flowers to the family in memory of Elizabeth "Betty" Petz, please visit our flower store.