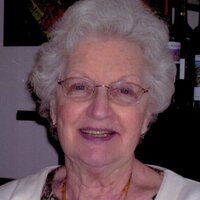 Milton - Elizabeth Jane Marshall, 90, died peacefully on Tuesday July 26, 2016 at the Vermont Respite House in Williston, with her loving family by her side.
Elizabeth was born on February 11, 1926 in Plattsburg, NY, the daughter of Sam and Rachel ( Morgan ) Blatt.
She was married to Lewis Peltier Sr. who predeceased her, she later married George Marshall, who also predeceased her.
Betty was employed by IBM in Essex, retiring in 1987.
She is survived by her children Lewis Peltier Jr. of Milton, Robert Peltier and his wife Jane of Milton, Ellen Rivers and her husband Clint of Vergennes, by her grandchildren Brandy, Matthew, Erin and her husband Bill, Jenna and her husband Craig and Summer, by her great grandchildren Ethan, Sam, Rachel, Jake and his wife Addy, Nick, Ben and Lucas, her brothers and sisters David Blatt and wife Betty, Albert Blatt and wife Cleo, Mary Lou Cadreact and husband Pete and by several nieces and nephews.
In addition to Lewis and George, Betty was predeceased by her sister Emma and brothers Louis, Sam and Richard and by her daughter-in-law Paulette.
In lieu of flowers, contributions in Betty's memory may be made to the Vermont Respite House, 99 Allen Brook Road, Williston, VT 05495.
A Funeral Service will be held on Saturday July 30, 2016 at 11am in the Minor Funeral and Cremation Center in Milton. Burial will be in the Milton Village Cemetery.

To order memorial trees or send flowers to the family in memory of Elizabeth Jane "Betty" Marshall, please visit our flower store.