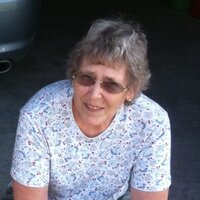 Milton - Elizabeth "Betsy" Everest, 71, died unexpectedly on Saturday December 10, 2016 at her home in Milton, with her loving husband by her side.
Betsey was born on February 20, 1945 in New Britain, CT., the daughter of Myron and Olga (Skoglund) Jones.
She married Larry Everest on November 2, 1963 on the family farm in Milton.
Together they settled on Beebe Hill Road where they have lived for over 53 years.
Betsy had worked for most of her career at the MCHV, DeGosbriand Unit before retiring. She had previously worked for Doc. Villemaire in Milton.
She loved to knit hats and mittens for the Milton Community Center and enjoyed watching the squirrels and birds around her home and tending to her flower gardens. She also loved her cats.
In addition to Larry, she is survived by her adopted family Todd and Sara Hart and their sons John Ryan and Shea Hart, all of So. Burlington and her sister-in-law Phyllis Gonyeau and her niece Debra Gonyeau both of Milton. She was predeceased by her parents and her sister Penny Violette.
A Graveside service will be held on Wednesday December 14, 2016 at 11am in the Miltonboro Cemetery.

To order memorial trees or send flowers to the family in memory of Elizabeth &#034;Betsy&#034; Everest, please visit our flower store.