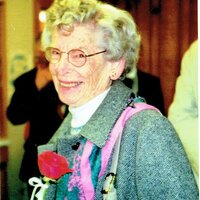 South Burlington - Elizabeth Palmer Andrews, 104, passed away peacefully on June 1, 2018 just one day after her 104th birthday. She had lived in South Hero for many years prior to moving to assisted living at Pillsbury Manor South.

Elizabeth was born in New London, NC to the late James and Lena Palmer. Following graduation from high school she attended Shuffard Beauty School and became a licensed hairdresser. She served in the US Navy during WWII and after her discharge she married Roger Andrews on August 8, 1947. After the wedding they resided in Edgewater, NJ and subsequently raised their family there. They summered in South Hero for decades and retired there in the early 90's. Elizabeth was active in the church in both locations and volunteered in South Hero at Granny's Attic and CIDER. While living in South Hero, she especially loved gardening, observing nature and visiting with the many friends who would stop by. In her later years the highlight of her day was often the CIDER van taking her to lunch at the Congregational church. Her secret to a long life was to "keep moving".

Her family wishes to thank the staff and aides at Pillsbury Manor South for their care and respect of Elizabeth during her stay there.

A Memorial Service will be held at the Congregational Church of South Hero on Friday, June 15 at 2 PM. Burial will be held in the New London City Cemetery, North Caroline at a later date where she will be laid to rest beside her husband and parents.


To order memorial trees or send flowers to the family in memory of Elizabeth Palmer Andrews, please visit our flower store.