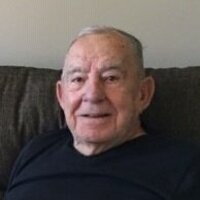 E. Raymond Lepage, 86, of Milton, VT passed away peacefully after a long illness at his son Bob's home in Cambridge, VT on June 13, 2019 surrounded by his family.

Ray was a skilled mechanic and owner of Ray's Citgo in Shelburne, VT for many years. He loved boating on Lake Champlain, traveling, and going for rides. He was also very passionate about auto racing.

He also leaves his partner of 34 years Elizabeth Lavalette and her children and their spouses; Chris (Jess) Lavalette, Jennifer (Dan) Boudreau & their two sons.

Ray was predeceased by his parents Albert and Rose Lepage, his son Ronnie, as well as his sisters Doris and Gaetan, and his brothers Florand and Roland.

In lieu of flowers, memorial contributions in Ray's memory may be made to Lamoille Valley Home Health and Hospice, 54 Farr Ave, Morrisville, VT 05661 or the Dementia Respite, 76 Pearl Street, Suite 201 Essex Junction, VT 05452.


To order memorial trees or send flowers to the family in memory of E. Raymond Lepage, please visit our flower store.