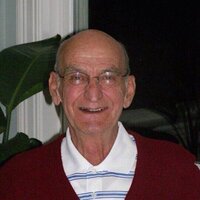 David was born on September 10, 1932 in Plattsburgh, NY the son of Sam and Rachel ( Morgan ) Blatt. David was always proud to be a first generation American and of his paternal Jewish ancestry.

Mr. Blatt served in the U.S. Army from 1952-56, stationed in Japan. He shared many stories of his time in Japan and climbing Mount Fuji. Following the Army David worked at Sondik and then began a 25+ year career at IBM as the plant benefits administrator, retiring in 1990. On February 26, 1953, David married Betty Ann Scribner in the United Church of Milton, they were married for 64+ years.

David and Betty had lived in Jericho for over 40 years, moving to Milton in 2003. In Jericho they also owned and operated Betty's Greenhouse. David had a love for flowers, plants, and everything nature. He enjoyed the arts, classical music, and his sweets! He was a past Treasurer of the Jericho Congregational Church for 16 years and a 30+ year Mason with the McDonough Webster Masonic Lodge.

In addition to his wife Betty, David is survived by his daughters Laura Luneau of Morrisville, Lynn Clarke and husband Charles of R.I., and Katherine Beauregard and partner Mike Ringuette of Underhill and by his sons David Blatt Jr. and John Blatt, both of Milton, and former daughter-in-laws Liz Stringer and Carmen Blatt. David is also survived by 11 grandchildren, 8 great grandchildren, his brother Albert Blatt and wife Cleo of Griffin, GA., and sister Mary Lou Cadreact and husband Peter of Enfield, N.H., and several nieces, nephews, and brother and sister in-laws. He is also survived by his very special adopted' son Timmy St. Amour and his wife Sandra Pirie-St. Amour and their two children of Marlboro, MA. He was predeceased by his siblings Sam, Richard and Louis Blatt, Emma Ladue and Betty Marshall and two grandsons Jared and Benjamin Blatt.

Per David's wishes there will be a private service at a later date. Friends and family are invited to call on Betty and family at 15 Erin Court, Milton on Saturday, April 29th from 1 to 5 pm.

For those who wish, memorials in David's memory may be made to the Birds of VT Museum, 900 Sherman Hollow Road, Huntington, VT. 05462

To order memorial trees or send flowers to the family in memory of David C. Blatt Sr., please visit our flower store.