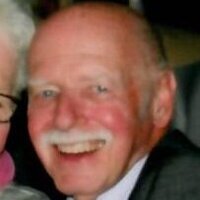 David Michael Joachim, 80, died peacefully on Friday, May 3, 2019 at the McClure Miller Respite House in Colchester following a courageous battle with cancer, with his loving family by his side.

David was born on May 14, 1938 in Burlington the son of Edmund and Mary (Killary) Joachim.

He served in the U.S. Air Force during the Vietnam War. He graduated from the University of Vermont with a degree in Environmental Studies and worked most of his career as the Zoning Administrator for the Town of Milton.

Dave was a member of the United Church of Milton, the Arrowhead Seniors, the VFW and the American Legion.

He and Barb spent many years living in Milton andFairfax and more recently have been residing at Pine Crest Senior Living in Essex Junction.

David had married Barbara Anderson Leavens in Milton in 1984 and lived several years in Milton.

For those who wish, memorials in David's memory may be madefor T Cell Lymphoma Research and Trials, c/o The University of Vermont Cancer Center, 89 Beaumont Ave., Burlington, VT 05401.

A Memorial Service will be held on Saturday June 8, 2019 at 11am in the United Church of Milton with a reception following in the church hall.


To order memorial trees or send flowers to the family in memory of David Michael Joachim, please visit our flower store.