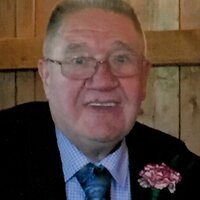 Georgia - Dale W. Camp, 78, died Monday June 5, 2017 at the University of Vermont Medical Center in Burlington, with his loving family by his side, following a courageous five year battle with Pulmonary Fibrosis.

At the age of eleven Dale showed the entrepreneurial spirit that would define his professional career, starting a business with his father's assistance, as a contract farmer, baling hay for farmers in the region. At the age of 16 he purchased a 400 acre dairy farm in South Royalton. In 1961 he sold off the equipment and cattle, paid off the farm and started a career as a mason.

In 1964 Dale met and married the love of his life, Mary Donahue of White River Junction. In 1966 they moved to Montgomery.

In 1968 Dale and Mary saw the potential of the precast concrete products industry and opened CAMP Precast Concrete Products, Inc. They started making septic tanks and other onsite wastewater products at their Montgomery home. In 1969 the business was moved to its current location in Milton, VT. In 1996 Dale and Mary passed on the business to their two sons, Kevin and Patrick.

In retirement Dale especially enjoyed gardening. He became a Master Gardener through the Vermont Extension Service and took great pride in providing fruits and vegetables to all of his family and friends.

Dale also enjoyed hunting and after retirement Dale and Mary traveled on many adventures across the western US, Canada and Alaska. They often pursued these adventures with Mary's brother Roger and his wife Marsha.

Dale was always the first one to volunteer to help out a friend or family member in need. His compassion for the needs of others and his enthusiasm to help were legendary among his friends and family.

Dales other activities and pursuits are too numerous to list but he enjoyed following the progress of Camp Precast and often stopped in to "check on the Boys." Dale loved to dance and visit with friends and family. His laugh would light up a room and his dips would leave his dance partners breathless.

Dales greatest passion in life however was his family. He was so proud of his children and grand children and rarely failed to attend an event that one of them was participating in.

The World is a much better place because of Dale's life. He left much more than he took and he will be impossible to replace. All of his friends and family will agree that "they broke the mold with Dale."

Dale is survived by his loving wife of 53 years, Mary Camp of Georgia, his children: Kevin and wife Karen of Georgia, Patrick and wife Jody of Temecula, CA, Earl and wife Leslie of Salt Lake City, UT and Julie of Hampton, NH; by his grandchildren Heather (Camp) and husband Spencer Coons, Ethan, Caden, Lane, Christian and Kyleigh Camp, his great grandchildren Carlton and Charlotte Coons, his brother David of Texas; many nieces, nephews, friends and his second family at Camp Precast.

Visiting hours will be held on Monday June 12, 2017 from 4-8 pm in the Minor Funeral and Cremation Center in Milton.

A Mass of Christian Burial will be celebrated on Tuesday June 13, 2017 at 11am in the Ascension Catholic Church in Georgia. Followed by a reception and a memorial service in the church hall where everyone will be encouraged to share memories and stories of Dale.

In lieu of flowers, the family has requested that donations be made to The University of Vermont Foundation in support of IPF Research at the Vermont Lung Center, c/o Ben Yousey-Hindes, Given Building N310, 89 Beaumont Ave, Burlington, VT 05405.

The Family wants to offer a special thanks to all of Dale's Doctors and Nurses at the Pulmonary Department and the caring staff in the Medical Intensive Care Unit at the UVM Medical Center.


To order memorial trees or send flowers to the family in memory of Dale W. Camp, please visit our flower store.