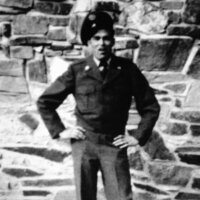 Conrad was born on March 11, 1930 at the Fanny Allen Hospital in Colchester, the son of Michael and Ardelle ( Fortin ) Sanderson.

He proudly served in the US Air Force during the Korean Conflict.

He and his brother Clifford owned Jim's Body Shop, originally on Battery St. in Burlington and for many years off Airport Parkway in So. Burlington.

In later years Conrad was a shrimp boat operator, antique store owner, carpenter, mechanic, gardener, and so much more. Conrad took pride in everything he did. He loved to travel and being behind the wheel of his car gave him the sense of freedom and adventure. But most of all Conrad was a philosopher at heart. He was very inquisitive, questioning and researching things that sparked his interest.

He and his wife lived at Apple Island Resort in So. Hero for over 20 years.

Conrad is survived by his wife and best friend, Yvonne B. (Perris) Sanderson residing at the Gazebo in So. Burl., his daughters Yvonne Whittington of TN, and Kim Sanderson of MA and his son Conrad R. Sanderson II and his wife Kat Kelly of NJ. , by his grandchildren Eric and Evin Whittington and Isabelle and Skye Sanderson and his great granddaughter, born on July 20th,2018, Baby Laura "Lu Lu" Whittington. He is also survived by his step sons and their wives, Ken and Ardis Beauchemin, Mike and Kim Beauchemin, Bruce and Daisy Beauchemin and Gary Beauchemin, his favorite niece Grace North Williams and good friend Moe Beaulieu. Conrad is also survived by his sisters Lucy Laughlin of Ohio, Norma Mayer of Georgia and Hilda Howard of Westford.

He was predeceased by hsi brother Clifford Sanderson and his sisters Valda Stone, Juanita Demar, Arlene Burt and Doris North.

Visiting hours will be held on Tuesday, July 24, 2018 from 4-7pm in the Minor Funeral and Cremation Center in Milton.

A Mass of Christian Burial will be celebrated on Wednesday, July 25, 2018 at 11 am in St. Rose of Lima Catholic Church in So. Hero.


To order memorial trees or send flowers to the family in memory of Conrad R. Sanderson, please visit our flower store.