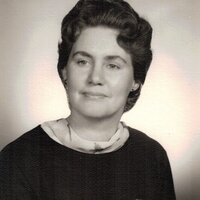 Colleen was born September 27, 1931 in St Albans, Vt., the daughter of the late Arthur and Ruth Rounds Toof. She is predeceased by her husband Dean W Blake and her brother Arthur D Toof Jr. She attended B.F.A. Fairfax, and was married on July 15, 1950 at the United Methodist Church of Fairfax. Colleen had a love for music, played the piano, sang at many weddings and was a member of the church choir. She also performed with the Barber Shoppers and a member of The Eastern Stars.

Funeral services will be held at the Minor Funeral Home on Monday January 15, 2018 at 2 pm with a Social gathering to follow. In lieu of flowers, donations may be made in Colleen's memory to a charity of one's choice.

The family would like to give a special thanks to the nurses and staff at the Manor for the excellent care they provided.


To order memorial trees or send flowers to the family in memory of Colleen Toof Blake, please visit our flower store.