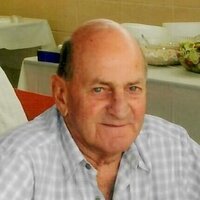 Milton - Clifton L. Gordon, 81, died unexpectedly on Tuesday November 3, 2020 at the University of Vermont Medical Center in Burlington.
Clif was born on November 15, 1938 in Burlington, the son of Joseph and Aline (Martell) Gordon and was raised and lived his entire life in Milton.
On November 22, 1958, he married Joyce Adams at St. Ann Catholic Church in Milton.
He was a successful businessman, was trustworthy, reliable and loyal to serving his community. He took great pride in his work.
Clif was a jack of all trades and was a very skilled butcher, carpenter, excavator and farmer. He especially enjoyed raising heifers on the home farm.
He was a charter member of the Eagles Club in Milton and was a member of the American Legion.
Clif is survived by his children Therisa McKeon of Walpole, MA, Norman Gordon and his wife Kathy of Venice, FL, Blaine Gordon of Milton and Linda Frey and her husband Ron of Westford, by his grandchildren John McKeon IV, Michael McKeon, Jason Gordon, Rachael Frasier, Lindsey Gordon, Erica Hatin, and Richard Hatin III; eleven great-grandchildren, his sister Arlene Lauziere, his sisters-in-law Pauline Gordon and Jeri Gordon and by many many nieces and nephews.
He was predeceased by his loving wife Joyce in 2013, his son-in-law John McKeon III in 2014, his siblings and spouses Gloria and Edward LaFountain Sr., Shirley and Stanley Reynolds Sr., Phyllis and Reginald Pidgeon Sr., Leland Gordon, Robert Gordon and brother-in-law Roger Lauziere Sr.
Due to COVID graveside services will be private.

To order memorial trees or send flowers to the family in memory of Clifton Leo "Clif" Gordon, please visit our flower store.