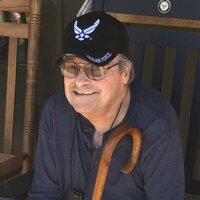 Milton - Christopher Alan Rouse Sr., 76, died peacefully on Wednesday June 5, 2019 at the McClure Miller Respite House in Colchester, with loving family members by his side.

Chris was born on August 17, 1942 in Burlington, the son of Alan and Lois (Wagner) Rouse. Chris graduated from Milton High School in 1960, and then served his country in the US Air Force. Chris was a manager at IBM for many years.

He was an avid fan of the New York Yankees and Nascar racing, especially driver Dale Earnhardt. He rarely missed watching a race.

Chris gave us many cherished and special memories, especially from his "chair of knowledge", and as float master at the Village Maple Sugarhouse in Milton. We are so thankful Chris could spend his last year here in Milton living with Julie and Bruce. Chris' laugh will be with us all forever. We all loved him dearly.

He is survived by his wife Clara (Atwood) Rouse of Surfside Beach, SC, by his children Christopher Rouse Jr.,(Kit) and his wife Crystal, Kevin Rouse and his longtime partner Shannon, all of Gastonia; Kenny Rouse and Kent Rouse both of Belmont, NC., his former wife Frances Screws of Belmont, his grandchildren Whitney Snyder, Abby Rouse, Kyle, Hunter and Autumn Rouse, Spencer and Wesley Rouse, his great-grandchildren Harrison and Charlotte; his brother Duane Rouse and his wife Teresa, and his sister Julie Talley and her husband Bruce, all of Milton. He is also survived by his dear cousins, nieces, and nephews, and very dear friends John and Sally Sharrow and Luis Betancourt.

The family would like to thank the amazing staff and volunteers at the McClure Miller Respite House for the care they gave Chris during his last days.

A celebration of Chris' life will be held at 11:00am on Saturday, June 22 at The United Church of Milton, Main Street, Milton, VT.


To order memorial trees or send flowers to the family in memory of Christopher Alan Rouse, please visit our flower store.