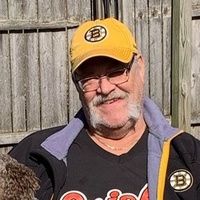 On Monday June 14th, 2021, Chris Clark loving husband, son, grandfather and great grandfather passed away at the age 64. He was born on March 6, 1957, in Burlington, VT to Erwin Jr. and Beverly Clark of Winooski., VT. He is survived by his wife Diane, 2 daughters Stephanie and Melissa; 5 grandchildren: Christopher, Brittany, Jazmyn, Jared and Brinley, and his great grandchildren Coen and Cali and his four sisters Sue, Sherry, Shelly and Kelly. Chris grew up in the Burlington area and attended Edmunds middle and Burlington high school, where he was a 3 star athlete. He played baseball, hockey, football, bowling, enjoyed collecting all kinds of sports memorabilia, going to the casinos, and loved to fish. Chris Clark also know as C.C., umpired and refereed baseball and hockey games. When not attending sporting events, you would find him spending time with his family. Chris was a hard worker. He worked for after-school programs for Burlington Rec. Dept. schools. He also worked 30+ years in the grocery industry. Chris battled kidney disease over the last year and a half, going to dialysis 3 times a week. We would like to thank all the caregivers who took such great care of Chris and helped him throughout fight. Visitation will be held on Saturday, June 19 between the hours of five and eight in the Minor Funeral Home. In lieu of flowers please consider a donation to: Vermont Kidney Association P.O. Box 502 Shelburne, VT 05482
To order memorial trees or send flowers to the family in memory of Chris L. Clark, please visit our flower store.