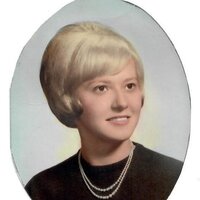 Westford - Carol Ann Mary (Campbell) Barkyoumb, 76, passed away Monday December 16, 2019 peacefully to join her husband Frank and son Brian.
Carol was born in Burlington on May 6, 1943, and raised in Winooski. She was the daughter of Louis and Hortense (Lareau) Campbell.
She was raised to speak French fluently. At the age of 4, Carol could play the piano just by hearing a song on the radio. She enjoyed teaching her daughter and granddaughter how to play. She was a guest on the W.D.O.T. radio station when she was young.
She graduated from Rice High School and Sheldon Beauty School. She went on to work at O'Brien's Beauty Salon on Main St. in Burlington.
She then met the love of her life, Frank Barkyoumb and they married on July 30, 1966. Together they raised 4 children.
They raised their children in Richmond and both worked at IBM. They later moved to Westford to retire and became school bus drivers for their sister and brother-in-law, the Mathieu's. School bus driving was a lot of fun for both of them and they loved all the kids.
Carol especially loved Halloween and dressing up to entertain the children as well as the adults.
When Carol was around, you knew that you were in for a good time.
Carol is survived by her children Kristine Roy and boyfriend Mitch of Fort Myers, FL, Steven Barkyoumb and wife Sarah Puretz of Burlington, Diane Russin and boyfriend Mike Dashno of Westford, daughter-in-law Lisa Barkyoumb of North Carolina, seven grandchildren Mason and Camen Roy, Rowan and Augustus Barkyoumb, Danielle, Colby and Avery Russin and several nieces and nephews.
Carol was an only child but was blessed to have a new family when meeting Frank and also leaves behind on brother-in-law Kenneth Barkyoumb and Sally Carpenter, eight sister-in-law's Janet Yandow and husband Roger, Gloria Ledoux, Betty Severance, Sandy Cuttings, Linda Mathieu and husband Richard, Brenda Irish, Debbie Irish and husband Mark and Susan Corse and husband Doug.
Carol was predeceased by her son Brian in 2012 and her husband Frank after suffering a brain tumor in 2017 and by her brother in laws Ray Ledoux, John Severance, Ron Cuttings and Ike Irish.
Mom always had a spark for life and it was hard to watch stage 4 COPD take that away from her. Hopefully those who knew her will think of her and smile for the great fun loving person that she was.
A graveside service will be held at St. Luke's Cemetery in the spring. A celebration of her life will follow at times to be announced in the spring.
For those who wish online condolences may be made to www.minorfh.com

To order memorial trees or send flowers to the family in memory of Carol Ann Barkyoumb, please visit our flower store.