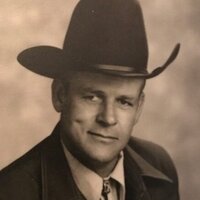 Billy Joe Johnson, 86 of Milton, passed away peacefully on Sunday evening, July 16, 2017 at the Starr Farm Nursing Facility in Burlington.

Billy Joe was born December 16, 1930 in Cold Springs, Texas the son of the late Willie and Epsey McMullen Johnson. As a dedicated United States Marine, Billy Joe served in the Korean War. On February 7, 1953, he married the love of his life, Della J. Roberts in Galena Park, Texas.

As a soft-spoken man whose manners defined the term "Southern Gentleman", he was also a talented artist and writer dedicating many of his works to those he loved and left behind under the pseudonym Joe Buck. In his younger days Billy Joe could often be found with a loyal companion by his side in the form of a blue tick hound or German Shorthair bird dog. His sense of humor and quick wit made for great stories when he was so inclined to share them.

Billy Joe is survived by his devoted wife of over 64 years, Della of Milton and their two daughters; Tara Parker-Ceballos and her husband, Hector of Houston, TX and Bonnie Turner and her husband, Armand of Milton. His three grandchildren; Jacob Tardiff, Greyson Howard, and Dana Trahan. His great grandson, Christopher Jordan, and his great granddaughter, Marlee Jane Tardiff.

A service to celebrate the life of Billy Joe will be held on Sunday, July 23, 2017 at 2:00 PM followed by Military Honors in the Minor Funeral Home, Route 7 in Milton. The family will receive friends in the funeral home from Noon to 2:00 PM before the service. Interment will take place in the Vermont Veterans Memorial Cemetery in Randolph.

In lieu of flowers, the family requests contributions be made to the Alzheimer's Association at www.alz.org


To order memorial trees or send flowers to the family in memory of Billy Joe Johnson, please visit our flower store.