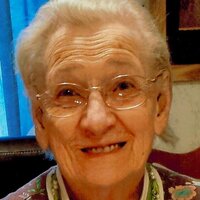 Bernice was born on October 15, 1925 in Essex Center, the daughter of the late Harry and Bessie (Sheldon) Center.

She graduated from Essex High School and married Frederic Weston

Bernice was very active throughout the years. She was bookkeeper and cashier for Alfred Mansfield Farm Equipment in Essex Center later driving school bus for many years, while helping Frederic on the family farm. She also worked for Browns River Maple and was a homemaker to her family and all their friends.

Bernice was active with the Republican Caucus and RSVP programs. She also was past President of the Women's Fellowship of the United Church of Cambridge, of the Westford Seniors and of the Jeri-Hill X.Y.Z. Seniors. She was also a member of the Second Congregational United Church of Christ of Jeffersonville.

Bernice also leaves her "adopted" daughter Cindy Berg of Underhill and her special family friend Esther McLaughlin of Westford, and by several nieces and nephews.

She was predeceased by her husband Frederic in 2007, her brother Walter Center in 1956 and her sisters Beatrice Bishop in 2011and Esther Cota in 2008; An infant brother and two daughters in law.

Memorial contributions in Bernice's name may be made to the McClure- Miller VNA Respite House, 3113 Roosevelt Highway, Colchester, VT 05446.

Mrs. Weston's family would like to give special thanks to all of the doctors and nurses at UVM Medical Center and the wonderful people at the Respite House for the excellent care given to Bernice.

Visiting hours will be on Friday December 29, 2017 from 4 to 7 pm in the Minor Funeral and Cremation Center in Milton, with a brief prayer service held at 6:45 pm.

Memorial service with burial will be in the Cloverdale Cemetery in the spring.


To order memorial trees or send flowers to the family in memory of Bernice C. Weston, please visit our flower store.