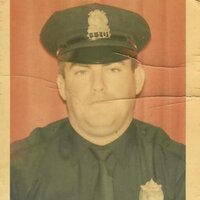 Milton - Benjamin Forrest Grant, 80, died unexpectedly at his home due to natural causes on December 11, 2020.


He graduated from Vergennes High School and two weeks out of school, enlisted in the US Army, serving three years as an MP in FT. Dix, FT. Benning, FT. Gordon, The Persido of San Francisco then Berhaven,Germany.


Always wanting to fly, he learned at the Middlebury Airport, obtaining his commercial pilot's license. He painted houses for Broussean Brothers, pumped gas for Beckwith's Motors, then hired at GE, and laid off with 2700 others. Hearing that Burlington Police was "hard up" for

police officers, he applied for a "Police Job" and started working for the department on May 26, 1963,


In 1969, he married Diane Marie Hamelin and a year later his daughter Cristal was born. Three years later Catherine was born.


He retired from the Burlington Police Department on May 26, 1998 after 35 years. To young to draw social security, he went to work part time as a security officer.


Ben enjoyed hunting, fishing, computer gaming, prospecting for gold and riding his motorcycle for fun. He also like spending time at camp in Fayston.

If you weren't sure, he loved to tell stories !!!


Ben is survived by his daughters Cristal Blaisdell and her husband Dale of Georgia and Cathi Jabloski and her husband Ray of Highgate Center, his grandchildren Michael, Michelle and Marsha Blaisdell of Georgia and Cristian, Dallas and Chloe Jablonski of Highgate Center, and by his brothers Howard "Buster" Grant and Robert Grant and his wife Joan and his nieces and nephews.


He was predeceased by his brother William "Bill" Grant.


There will be no services at this time, a celebration of his life will be held in the summer of 2021.


For those who wish, online condolences may be made to www.minorfh.com

To order memorial trees or send flowers to the family in memory of Benjamin Forrest Grant, please visit our flower store.