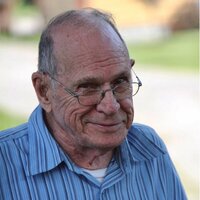 South Hero, VT - Joseph Arthur Henry Pratt (93) passed away peacefully on September 29, 2020.
Arthur is best known for passing out over 2,000 pins asking: "Has anyone told you they love you today?" He wanted to make sure everyone felt
the love of Jesus Christ in their lives.
Arthur was born in Winooski, VT on August 8, 1927, the son of Wilfred and Mary Lacroix / LaCross. He was predeceased by his brothers Leo and Harry, his first wife Therese (Yergeau) in 1996 and his second wife Dorothy (Erwin) in 1992.
At the age of 17, Arthur left high school to join the Navy and served in the South Pacific for two years before the war ended. Arthur later received an honorary high school degree from Winooski High School in 2006.
Throughout his life, Arthur enjoyed the building trades. He worked for Rocheleau Interior Decorating for 15 years, operated his own business for a number of years and then worked for Flanders Lumber for 21 years. Once retired Arthur worked for Shaw's in Colchester, then Lowe's in Essex Jct.
Arthur is a member of VFW Post 10854, Grand Isle, VT and American Legion Post 91, Colchester, VT. He was also active in Ignite Christian Church in Williston, VT serving as deacon and a member of the outreach team ministering in prisons and at the Champlain Valley Exposition in Essex Jct., VT for many years. These ministries included a band where Arthur enjoyed playing his guitar and harmonica.
Arthur also enjoyed many years of hunting in the woods of VT and NY with his family.
Arthur is survived by his wife of 20 years, Virginia B (Lyman). His is also
survived by his two biological children, Paul and his wife Margaret of Winooski, VT and Pamela Watson and her husband Paul of Harrisonville, MO. His five stepchildren with Dorothy (Erwin), Joseph and Carmen Benard of Williston, VT, Rick Benard and Pat Lafrance of Westford, VT, Sandra Quesnel and Malcolm Towns of Crossville, TN, Kelly and Rick Durack of Georgia, VT and Tina Benard wife of David Benard who passed in 2016 of Mason City, Iowa and his four stepchildren with Virginia B. (Lyman), Robert and Christa Lyman of Burlington, VT, Craig Lyman of Hinesburg, VT, Linda Benway of Manchester, VT and Patricia M.Lyman of Martha's Vineyard, MA. Arthur is survived by many grandchildren and
great grandchildren.
Visitation will be held in his honor at Minor Funeral Home, Milton, VT on
Tuesday October 20th, 2020 from 5 - 7pm with a wake service at 6:30pm. A Memorial Service will be held at Ignite Church, Williston, VT on Wednesday October 21st at 10am, to celebrate his life, his service to his church and the love he expressed to all.
COVID protocols will be observed with masks required at all gatherings.
In lieu of flowers, donations can be made to the Arthritis Foundation on the
following website: Arthritis.org or to Ignite Church, 1037 S Brownell Rd,
Williston, VT 05495.
Online condolences may be made to www.minorfh.com

To order memorial trees or send flowers to the family in memory of Arthur Joseph Henry Pratt, please visit our flower store.