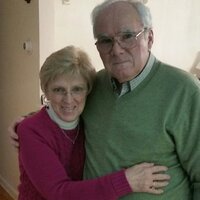 Essex Junction - Arlitha Anne (Howrigan) Racine, 76, died on Saturday, January 4, 2020 at the McClure Miller Respite House in Colchester, following a courageous battle with cancer, surrounded by her loving family and friends.
Born in Colchester, VT on November 15, 1943, Arlitha was the daughter of Wilson P. and Katherine E. (Harte) Howrigan.
She attended elementary school in Westford, VT and graduated from Bellows Free Academy in Fairfax, VT in 1961.
On May 15, 1965, Arlitha married Conrad H. Racine at St. Luke's Catholic Church in Fairfax, VT.
Arlitha was employed by IBM, Essex Junction, VT until her retirement in 1996, after 29 years of service. She had previously worked at the Mary Fletcher Hospital (now the University of Vermont Medical Center) for 5 years and General Electric (now General Dynamics) for 2 years. She was last employed as Assistant Town Clerk in Westford, retiring in 2008 after 6 years of employment.
Arlitha enjoyed spending quality time with her friends, going to movies/plays, luncheons and dinners, shopping or just spending time visiting with them.
Arlitha is survived by her loving husband, Conrad, of 55 years, her sister-in-law Alice Buinicky of Milton, VT, Alice's daughter Melodie Lafromboise of Milton, VT and many cousins in VT, NY and Quebec.
She was predeceased by her parents, Wilson P. and Katherine E. (Harte) Howrigan, her father-in-law, Conrad L. Racine, her mother-in-law Edith (Martin) Racine and her brother-in-law, Dennis W. Racine.
Donations in Arlitha's memory may be made to the Franklin County Humane Society, 30 Sunset Meadow, St. Albans, VT 05478.
Arlitha's family would like to thank Dr. Unger and his competent and caring staff. Thank you Margaret.
Visiting hours will be held on Monday January 13, 2020 from 4-7 pm at the Minor Funeral Home in Milton.
A Funeral Service will follow at 7 pm.

To order memorial trees or send flowers to the family in memory of Arlitha Anne Racine, please visit our flower store.