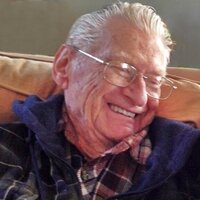 South Hero - Allen "Red" Wells, 98, died peacefully early Monday morning, January 16, 2017 at The Arbors in Shelburne.
Red was born in Poughquag, New York on July 17, 1918, the son of Rev. George and Lucy ( Allen ) Wells.
Red proudly served in the U.S. Navy during WWII, aboard the U.S.S. Missouri and observed the signing of the Peace Treaty in Tokyo Bay in 1945.
He attended Bard College and later worked for the Scintilla/Bendix Corporation, as a tool and gauge inspector, and retired following 42 years of service.
He is survived by his children Jonathan F. Wells and his wife Alice of South Hero, and Kathleen (Wells) Cooper and her husband Christopher of Maine, by his grandchildren Heather (Wells) Trombley and her husband Steve, of South Hero, James Wells and his wife Shannon, of South Hero, Wendy (Wells) Aydinyan and her husband Dr. Kahren Aydinyan of Jenks, Oklahoma, Graydon Cooper of Texas, Hazel Cooper and partner Sam Grondin of Maine; and by his great grandchildren Lauren and Catherine Trombley, Minnette & Claire Wells, all of South Hero, Elise & Philip Aydinyan of Oklahoma, and Karter Cooper and Ally Grondin of Maine. Red is also survived by his nephew George Wells and niece Janet (Wells) Fagan of Arizona, and Christine Jogo of Johnson City, N.Y., and his first cousins Eleanor "Polly" (Allen) McBride of South Hero and Pillsbury Manor, Ruth (Wells) Baxter of Maine and Ray W. Allen of South Hero.
He was predeceased by his brother Horace Dewey Wells of Riverhead, Long Island and his former wife Grace Knox.
A graveside service will be held in the Wells family lot in the So. Hero Cemetery in the summer at the convenience of the family.


To order memorial trees or send flowers to the family in memory of Allen "Red" Wells, please visit our flower store.