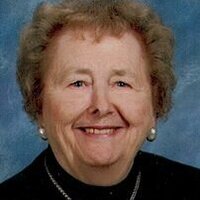 Alice Robinson passed away on January 12, 2018 in Georgia, VT where she resided with her son Roland and his wife Sue.

Alice was born in Winooski on July 22, 1923. She was the daughter of the late Joseph and Flora (Mercure) Meunier.

Alice loved reading, crocheting, crossword puzzles and a ladies bowling league in Milton. Her greatest joy was her children, grandchildren and great grandchildren.

Along with her husband she operated Bill's Furniture in Milton for 20 years.

Alice is survived by four children. Edward of Milton, Roland and wife Sue of Georgia, Nancy Clodgo and Rene of Milton and Carol and Roger of Milton.

The family would like to thank Franklin County Home Health Hospice staff and volunteers for their outstanding support and care for mom and her family. You were all a bright spot in Alice's day.

Visiting hours will be held on Tuesday January 16, 2018 from 4-7 pm in the Minor Funeral Home in Milton.

A Mass of Christian Burial will be celebrated on Wednesday January 17, 2018 at 10 am in St. Ann Catholic Church in Milton.


To order memorial trees or send flowers to the family in memory of Alice C. Meunier Robinson, please visit our flower store.