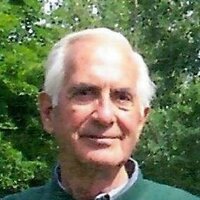 A. Peter Gay Sr., 81, of Milton, VT passed away on March 7, 2021, in the McClure Miller Respite House in Colchester, VT after a period of declining health. He was the husband of Shirley Milton Gay.

Pete was born on August 15, 1939, in Rockland, Maine to Alvary and Dorathea Gay.

Upon graduating from Thomaston High School, he was awarded a full academic scholarship to Bowdoin College.

After attending Bowdoin, he found his true calling in working with people and decided to go to the National Meat Cutting School in Toledo, OH.

On December 25, 1965, Pete married the love of his life Shirley Milton Gay in Warren, ME.

Pete would then accept a job with First National, which would bring Pete and the rest of his family to Milton, VT. He then worked as the General Manager of Cyr Lumber for 18 years.

After his time with Cyr Lumber, Pete finished his career as a meat manager for

Grand Union Supermarkets for many years until its closing.

>Pete and his wife Shirley were proudly married for 55 years and were inseparable throughout their long and happy marriage.

He enjoyed spending time with his family and supporting his grandchildren through their various athletic and extracurricular activities.

Pete had the gift of being able to strike up a conversation with anyone, no matter if he was at a soccer game, the senior center, or the grocery store.

Pete's work ethic was second to none, and was adamant on instilling this value within his children and grandchildren.

Pete is also survived by his three siblings, William "Bill" Gay of Owl's Head, ME, Betsy Feyler of Thomaston, ME, and Susan Greenhalgh of Old Mystic, CT.

Pete is preceded in death by his parents Alvary and Dorathea Gay, daughter-in-law Wendy Howard, and brother-in-law Richard Feyler.

Pete's family would like to sincerely thank the McClure Miller Respite House staff for the kindness, compassion, and exceptional care they provided Pete during his final days.

For those who wish, contributions in Pete's memory may be made to the American Diabetes Association.

The family will not be holding services due to the restrictions with COVID-19 and will have a celebration of life during the summer.

To order memorial trees or send flowers to the family in memory of A. Pete Gay, please visit our flower store.